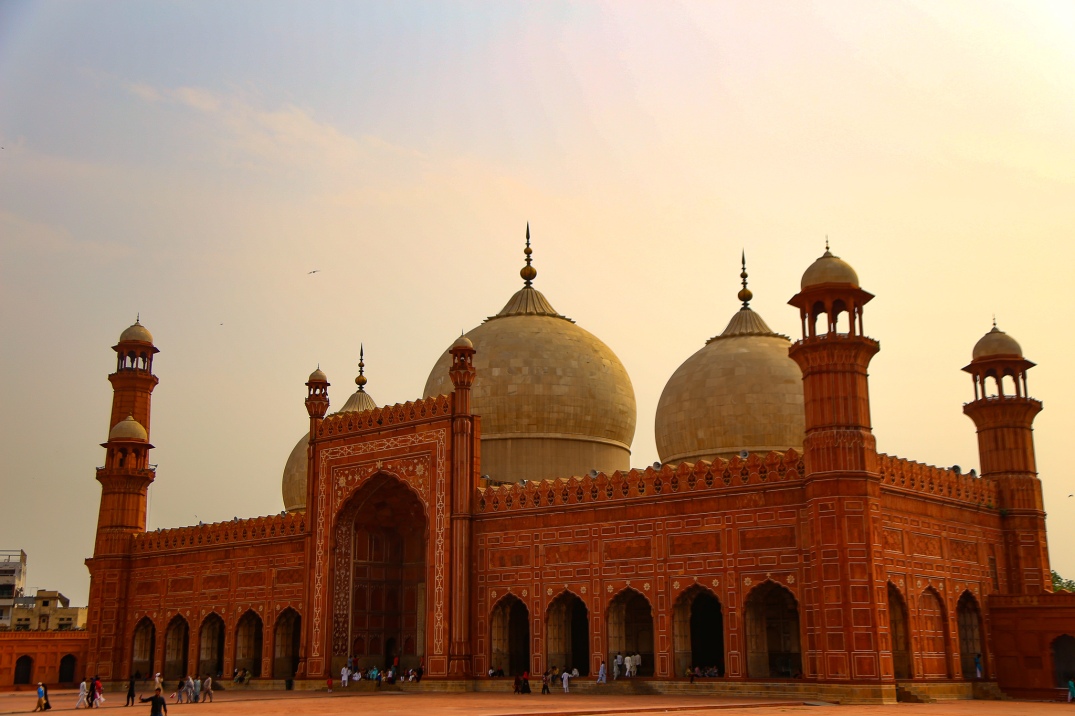 The journey to Pakistan was as rough as they come. It was hell but I suppose that comes with the territory when you book a a cheap flight to Pakistan. Every 3 of the connecting flights were ideally delayed one a mere 8 hours so this gave me a lot of thinking/ reflection time as to why the feck I was coming to Pakistan on my own….??

I think after about 30 hours I arrived into Lahore’s airport and got totally overwhelmed. I couldn’t stop crying while waiting for my bag in the tiny airport.  I was a basket case  to put it mildly. All of the armed guards looked utterly confused. I’m blaming watching a star is born on the plane for the flood works. I was bundled into a taxi from what I recall with a nice chubby man. He wanted money for his ‘assistance’ it was probably his lucky day as I have no idea what I gave him but he seemed exstatic. The taxi  journey was almost as turbulent as the flight over. Supposedly there is a road tourists aren’t allowed to pass through, taxis must take a different route which is significantly longer. Obviously my chap did not do this. I got held up at a police check point as a result where every second person had a massive rifle. Passport went MIA for 30 minutes but we eventually got the all clear and were back on the road. I was dropped off at Lahore’s one and only hostel (which honestly is fairly grim at best).

I slept for a record 12 hours and decided to check out the Pakistani couchsurfing scene not loving the ‘hostel vibes’. I know I complained about the Iranian heat but Jaysus Pakistan is giving it a run for its money.

Uber is big over here and you can choose from car, moto or tuk tuk which is great and your not dealing with cash which is always a bonus unless your me and you forget the fare comes straight from your account and you pay them all cash anyway!!!

So when I arrived to Mr Jami’s house I thought I was lost as I rocked into a Tax Consultancy Building.  Anyway his staff soon welcomed me and escorted me into the fabulous building. Mr Jami was actually travelling in New Zealand at the time but is well known in Lahore for his generosity towards tourists and has an array of staff to look after the guests. I was extremely lucky as I was welcomed into my own room with AC. I was given a fabulous lunch spread and some chai before hitting the leaba.  I couldn’t believe my luck.

Later in the night a German traveler ; Ivi arrived. A 20 year old Berliner who is travelling the world for one year and is finishing her trip in Pakistan.  We talked all night and it brought me back to my sleep over days.

Ivi was so interesting and ridiculously well traveled for her age. Meeting her was a god saint and brought me back to earth. She explained her challenges as a solo female travelling in these strict Islamic countries and how the discrimination has been so hard (mostly psychological in her case). She also traveled solo in Iran and said it was a walk in the park compared to Pakistan. But she was completely on the same page as me and a sucker for a challenge so I got some life saving tips off Berlin.

Ivi, being from Berlin was ridiculously cool so the following morning we got our uber tuk tuk to go check out a second hand market. Ivi, doesn’t buy anything new and had a v good eye for thrift shopping. I felt like a helpless hippo following this cool 20-year-old around the place. First purchase of the day was an ex-army backpack with urdu written on it. Ivi got extremely excited when she spotted this. I thought it was so ugly (and dirty) but Ivi convinced me it was ‘cool’ and way ahead of Berlin’s time and that I would be a fool not to buy it. So now I am also the the proud owner of the next best thing!!!! (who know’s maybe this is a stepping stone to me becoming an influencer). It cost €1 so I shan’t complain. * As I write this in hindsight I can confirm army bag was NOT worth it. It destroyed a brand new shirt I bought as I got caught in the rain. All of the dye started leaking. It has since been handed down to Dom who is chuffed.*

The people all seemed really friendly but equally surprised to see two foreign girls in a metal market. Generally speaking women over here don’t walk the streets, especially alone. We took regular pit stops for chai and chats. This hot drink somehow kind of helps with the heat (apparently).

That night we were both invited to a couchsurfing meet up dinner. This is organised by Pakistanis who are trying to promote tourism in the area and unite foreign travelers in the city (as there are so few of us).  It was so nice and we had a delicious spread of roti, naan, rice, raita, salad, and a massive spread of different barbequed meats. They are constantly trying to make tourists feel welcomed and will absolutely not let you pay. It was great to connect with other travlers. The polish couple were travelling for 4 years in a converted ambulance which they bought in Poland. Inspiring stuff. These were the first and last travelers I was going to meet for the next 5 weeks……

The next day, after being pampered by the staff in Mr Jami’s we set off to go explore the walled city and do some more thrift shopping (Ivi’s gig not mine).  The walled city is mental and in ever corner there is something more bizarre than the next. It’s hot, chaotic and dirty but it’s excellent. I love getting lost in these kind of places and the people were constantly greeting us with intrigued smiles and invitations for chai (that being said of course there was the odd creep lurking around). It kind of reminded me of the less touristy streets of Kathmandu except a little bit more mental.

We checked out a beautiful hidden Masjid Wazir Khan. The Mosques here are completely different to that of Iran, not as well kept but have their own old world charm and are stunning. 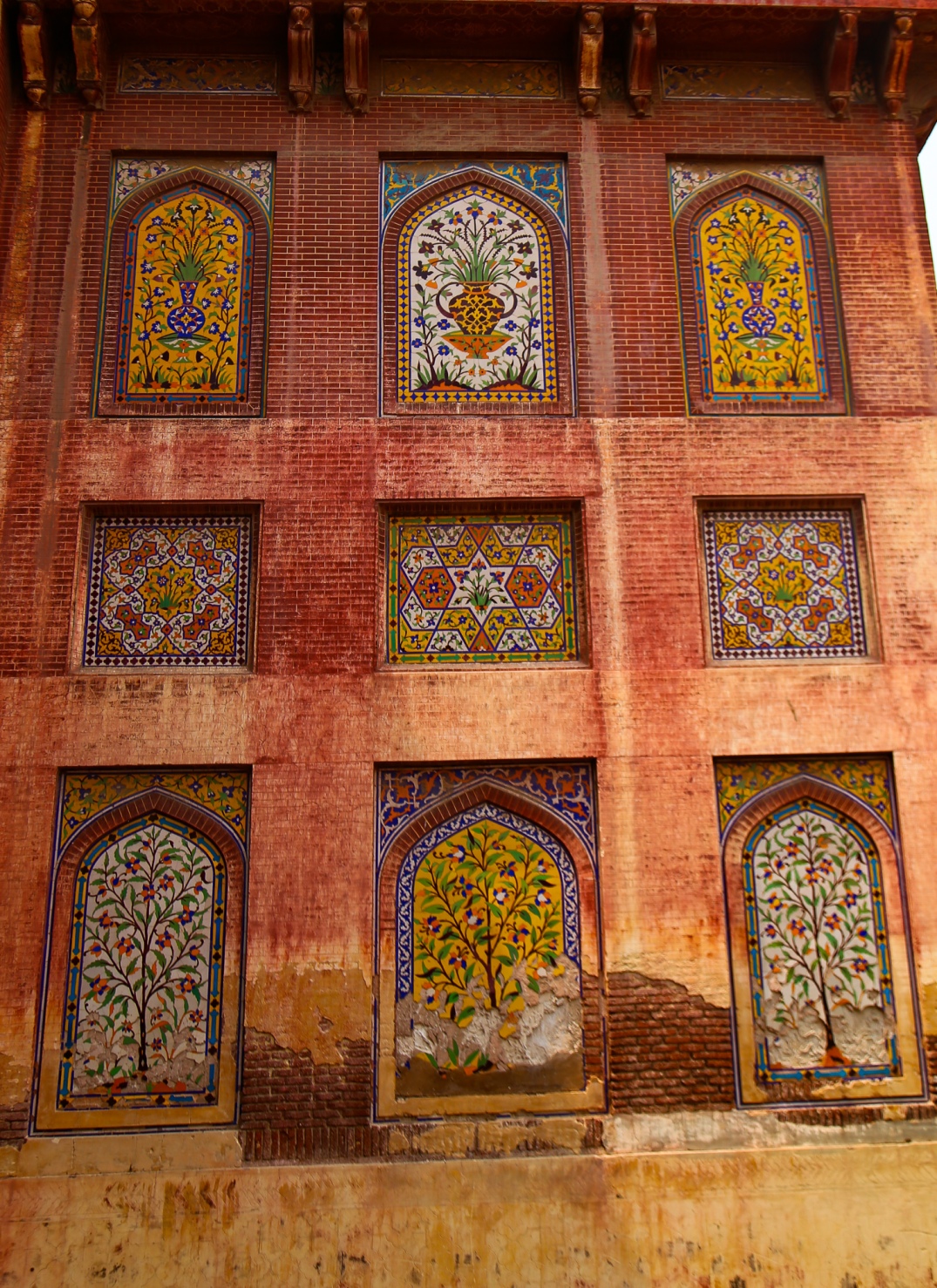 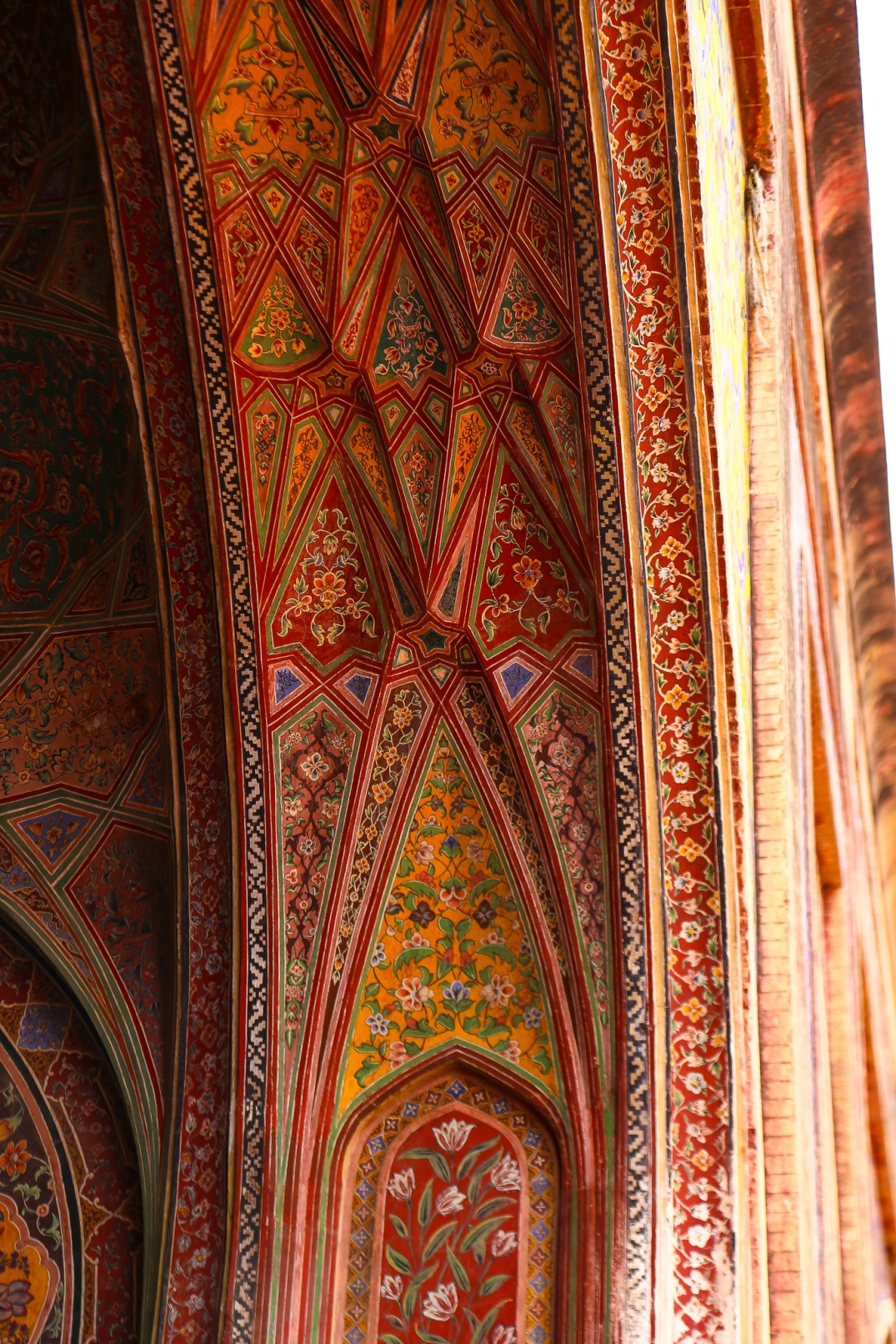 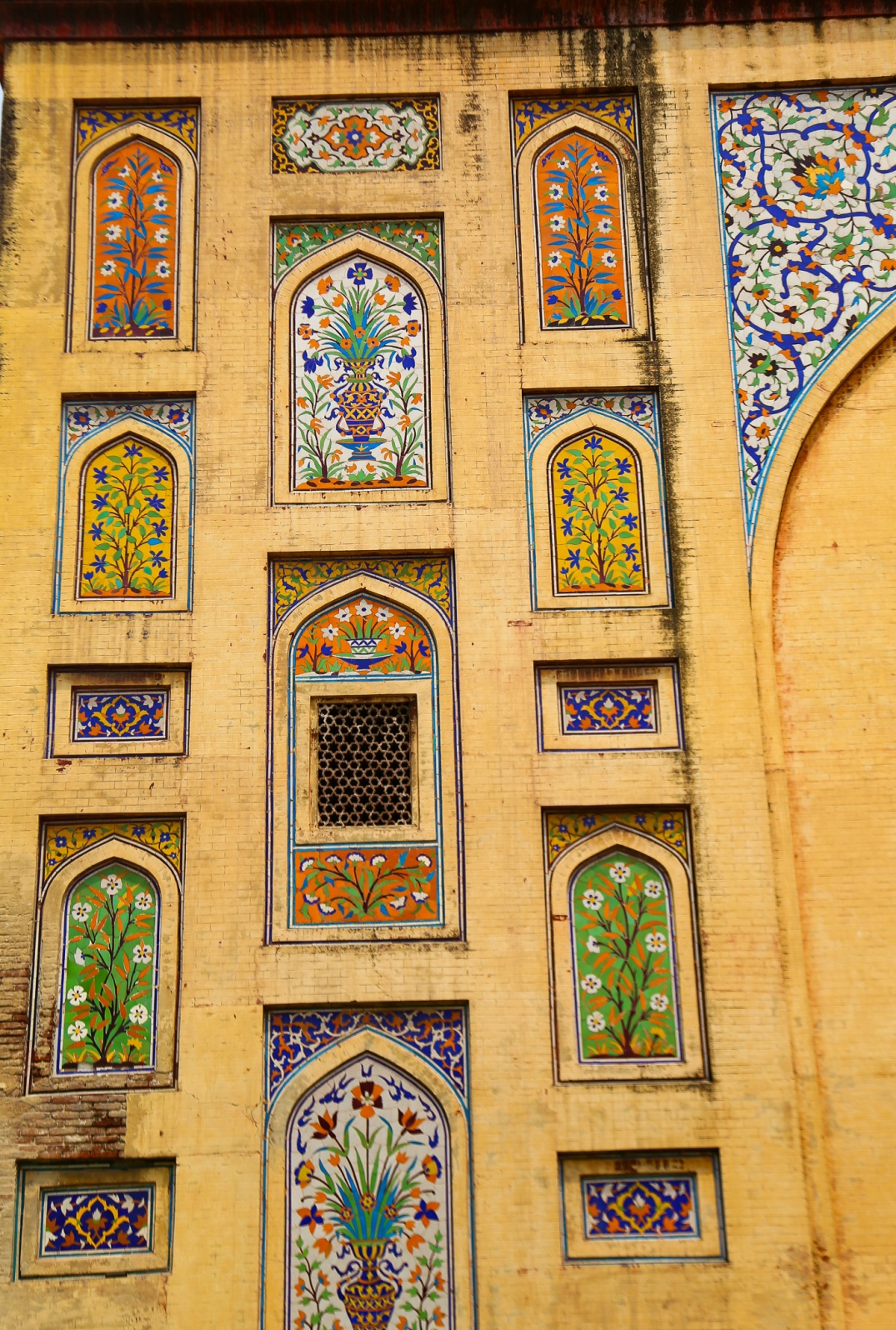 Some more thrift shopping in the afternoon consisted of shirt shopping with Ivi. Each costing 70c and on the right person definitely looked ‘cool’ whatever the feck ‘cool’ means now a days.  I bagged myself a green silk number and at the time I thought I hit the jack pot. It was only when I came back and did the fashion shoot with Ivi that I resembled a hideous, demented clown. The green shirt was gifted to the cleaner who seemed a little confused and amused by the gesture.

Meeting Ivi gave me the motivation I badly needed. I was completely overwhelmed and a little bit disillusioned with Pakistan at the beginning but I figured if a 20 year old girl could hack it so could I. This young girl is inspirational and is going to move to the Netherlands to study politics. Good luck my friend you are destined for amazing things.

At one point I thought I was going to have to be hospitilised because of the heat. I don’t know how the locals keep eating these hot curries and chapatis in the stifling heat. Next on the agenda was Islamabd where I was couchsuring with a funny chap called Faz (an extremely devout Muslim). We got off to a flying start when we presented me with some Nutella and a strong espresso he studies in Italy (hence the coffee). Things soon went down hill from here when he started asking me what the purpose of my existence was, what my mission in life was and you pretty much get the gist of it. I spent the night with an Irish lad called Chris who is working in Islamabad for 6 months (thanks Meave for the connection). Having spent the entire afternoon with this  extremely devote Muslim it was refreshing to hear an Irish accent and a welcomed break from the small talk, broken urdu and the selfie requests. We gorged ourselves on the most divine Pakistani food. I took an uber back to funny Faz’s house where he very conveniently had his phone switched off and I very stupidly forgot the house so I was locked out for over 30 minutes in a fairly sticky looking neighborhood. Anyway the next morning I didn’t dilly dally and said my goodbyes.

My short introduction to Pakistan so far has been a series of random strangers trying to help me. The hospitality in this country is parallel to Iran and really is remarkable. What I would say is sometimes it is a little overwhelming as you don’t have a second to breathe as there are ques of people inviting you for chai, dinner, to stay with him or travel with them. I hate saying no to people but also you have to have you wits about you. If you want to come to Pakistan for some alone time forget about it!

Anyway my good friend Em was renting an apartment with a Pakistani girl called Gulma  in Paris and Gulma put me in contact with her cousin who lives in Islamabad (v distance connection). Since my arrival in Pakistan this man was ringing me multiple times a day and sending me extremely concerned messages. Checking was I hungry, too hot and what he could do to help. I think the people here are genuinely in dis belief when they see a girl travelling alone as it is completely against their culture. All very nice but way OTT.

It got to the stage where the Shavaz had invited himself on my trip up north to the mountains for 2 weeks. Put on the spot, I’ll agree to anything and then usually I fecking regret it instantly. I once signed up to a 10 day solo trek in Peru with an aggressive ex army Israeli lad I met in a hostel. I spent days worrying about how I would get out of it so my new rule of thumb is you have to be cruel to be kind. I told Shavaz I would meet for coffee but it was too soon for a 2 week camping expedition with a strange man. It did the trick. Anyway Shavaz turned out to be very kind albeit very conservative and concerned.

Next stop was Northern Pakistan the main reason for the trip was always the mountains. It is known as the jewel of Pakistan and home to 9 of the tallest mountains in the world and just like everywhere in Pakistan at the moment is untouched by tourism. The journey started off as v pleasant until lunch decided to make an appearance. I was violently sick for the journey and was given complementary puke bags (thank god). I survived the 6 grueling hours and was even gifted with some trendy beat ‘like’ earphones by the kind bus man. I had absolutely no idea about what was awaiting me in Northern Pakistan….A scary adventure of a lifetime