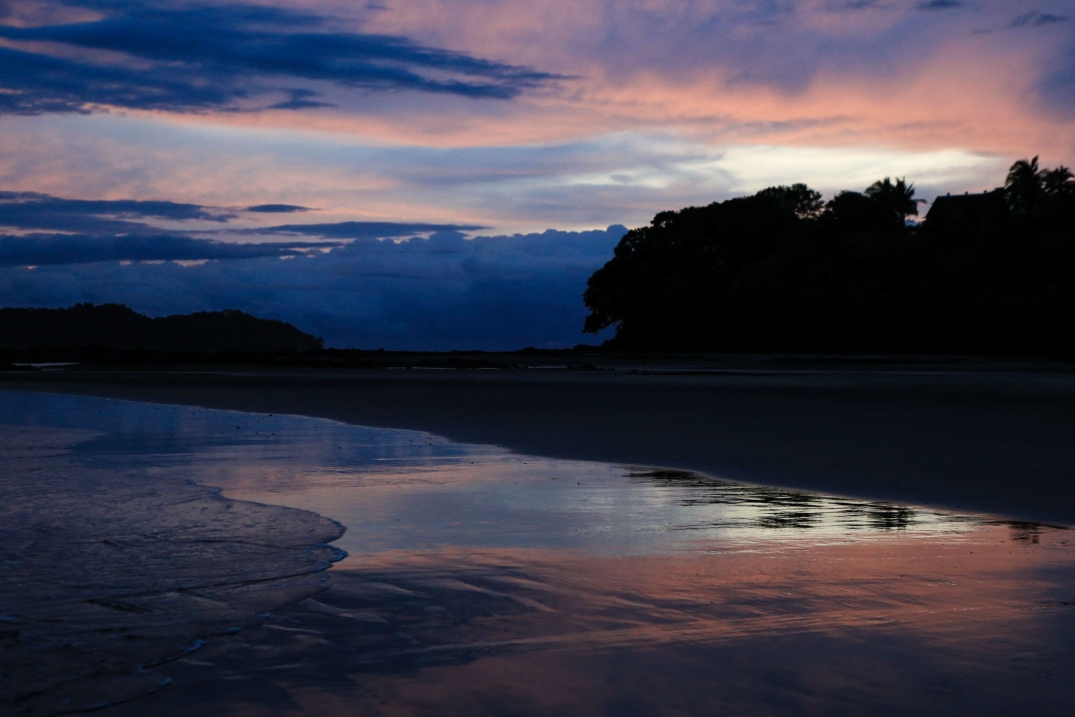 I arrived in Santa Catalina which is on the Pacific coast of Panama. It is famous for its black sandy beaches, excellent surfing and snorkelling. I was really looking forward to a few days camping. The one hour trek to the campsite was torture made even worse when a treacherous storm broke out. Drenched with my ever-expanding baggage I got picked up by the nicest stranger who drove me to my ‘campsite’. The owner tried to warn me not to camp that they were in the height of rainy season and I would be the only one. Anyway I decided to take my chances and figured I have been through worse conditions. With tent successfully pitched I went for an evening stroll where I successfully managed to lose my shoes. When I got back to my tent I got the fright of my life when I found an iguana in my sleeping bag. During the night a coconut fell on my tent causing one of the bars to snap. This really was a disaster especially with the rain storms the tent quickly started to fill up with water. Humidity, heat and sand are a recipe for the worlds worst sleep. The novelty of my brand new tent was certainly short-lived.

The next day was just spent chilling and swimming on the beach where I stupidly lost my 21st pair of sunglasses ( but who is counting). Don’t worry hairy eyes your still going strong and only brought out for the best of occasions.

My second nights sleep wasn’t much better when I found a dead eel lying outside my tent infested with flees, ants and insects who subsequently paid me a visit. I am still trying to get over the vomiting bug and got violently sick during the night. I ended up landing on the ell mid puking episode unable to see a thing. To add to the situation  mid getting sick my toes were getting bitten by swarms of crabs (apparently Panama is v famous for its crabs).  I’m not going to sugar coat this one it was so so shit.

The next day I had planned on going whale watching. Panama is unique in that Whales migrate from both north and south poles and meet in Panama. At this time of year it is breeding season for humpbacks so I was very excited to spot a few and apparently there are thousands at this time of the year. This was the only reason I had Santa Catalina on the list.

The tour started out with a 2 hour boat ride to Isla Coiba, a world heritage site. It contains exotic sea life often compared to that seen on the Galapagos. My head was in bits trying to spot whales but there was no sign of them and things were looking a little bleak.  Our first snorkelling spot was nice.  We saw two sharks and a few sea turtles but I was most impressed with a blue puffer fish.

After a seafood lunch we made our way to our next snorkelling point and this is where things started to get better. We saw 4 huge humpback whales. Unfortunately I couldn’t get a decent picture as they were way too fast. I was delira and relieved to have spotted them. 10 seconds later the guide said we could snorkel there. Just a little concerning knowing there were a load of whales floating nearby. Anyway quite nervous I jumped in nonetheless mesmerised by the amazing coral and sea life. After a few minutes I looked up and realised  I was completely alone with no sign of the group.  I eventually realised they were all back on the boat. The guide was screaming at me to come back, not concerning at all….. Trying not to panic I tried to swim but the current was way too strong and dragged me out further. At this stage I was freaking out imagining the humpbacks close by. The guide was directing me to swim behind some rocks to try to get back. This is where I ended up swimming into a gang of jelly fish stinging my entire body. After what felt like a life time I reached the boat. Relieved that jelly fish stings were my only complaint.

We had one final snorkel spot which most people opted against freaked out by the whales and jelly fish. This was fantastic and I saw amazing schools of exotic fish most of which I had never seen before.

My last night camping was as horrific as the rest. So with the tent broken it was already soaking wet and covered in black sand. Trying to ignore the bleak set up I tried to listen to my sleeping playlist. After a few hours I felt movement in the tent and knew I had a visitor. At first I thought it was a rat but turns out it was a massive crab eating through my food bag. I freaked out ended up hitting it with my pepper mill trying to get rid of it. The little fecker ended up eating my brand new ear phones ( sorry Una). Obviously there was no more sleep to be had for the rest of the night.

During my camping escapades I managed to break my laptop I think caused by all of the humidity.  Any way all in all a successful few days that I certainly won’t be repeating. As always trying to look at the positives rough episodes like this make having a bed all the sweeter.

Unfortunately my bed the following night wasn’t exactly what I had in mind. After a 10 hour bus journey I arrived in the middle of the night. There was a horrific thunder-storm so I was desperate and just went to the only available hotel. All that was on offer was a toilet-less room for an extortionate 15 dollars. The owner told me the area was extremely dodgy and advised not leaving the ‘hotel’. He said if I really needed the loo I could pay his next door neighbour. The bed was covered in muck and there were ants on the walls. I’m not fussy at all but you have to draw the line somewhere. I went searching for the mysterious neighbours toilet which was padlocked up and neighbour was MIA. I asked the owner could I use his bathroom and he said he didn’t have one either. Apparently Panamanians don’t need toilets!!!Absolutely desperate and dying for a pee I had no other option but to use a plastic 7 up bottle I luckily had in my bag. Feeling like a caged animal I realized this certainly wasn’t my finest hour. It also made me realise that there are some horrible people out there and that hotel owner was a nasty piece of work.

The next morning I packed up and made my way to the bus station delira to be leaving Panama.  I had a flight out of San Jose to Mexico city. At the moment Nicaragua is extremely dangerous with no one allowed into the country. It is a similar situation to what is happening in Venezuela.

I stayed in a hotel in San Jose just before my flight to Mexico. I was sharing a room with an odd American Man. Before going our separate ways he asked me if I wanted him to pray for me. God knows it couldn’t hurt given my track record so I agreed. After an uncomfortable 5 minutes of prayer we said our goodbyes. The hotel I was in had a school tour of about 30 15 year olds. I was absolutely allergic to them and even more so when they dipped into my supplies of chocolate that I stupidly left on the table. Once again I almost missed my flight spending ages trying to hunt down my pepper mill which the hostel owner had taken!! That pepper mill is one of my best assets at the moment.

Certainly one of the more challenging weeks but that is to be expected when your travelling for 10 months. The rough times make the good times a lot sweeter. My friends Meabh and Coco describe backpacking as periods of peaks and valleys and this week was certainly a deep dark valley. I am looking forward to a stiff tequila and a bucket load of tacos.