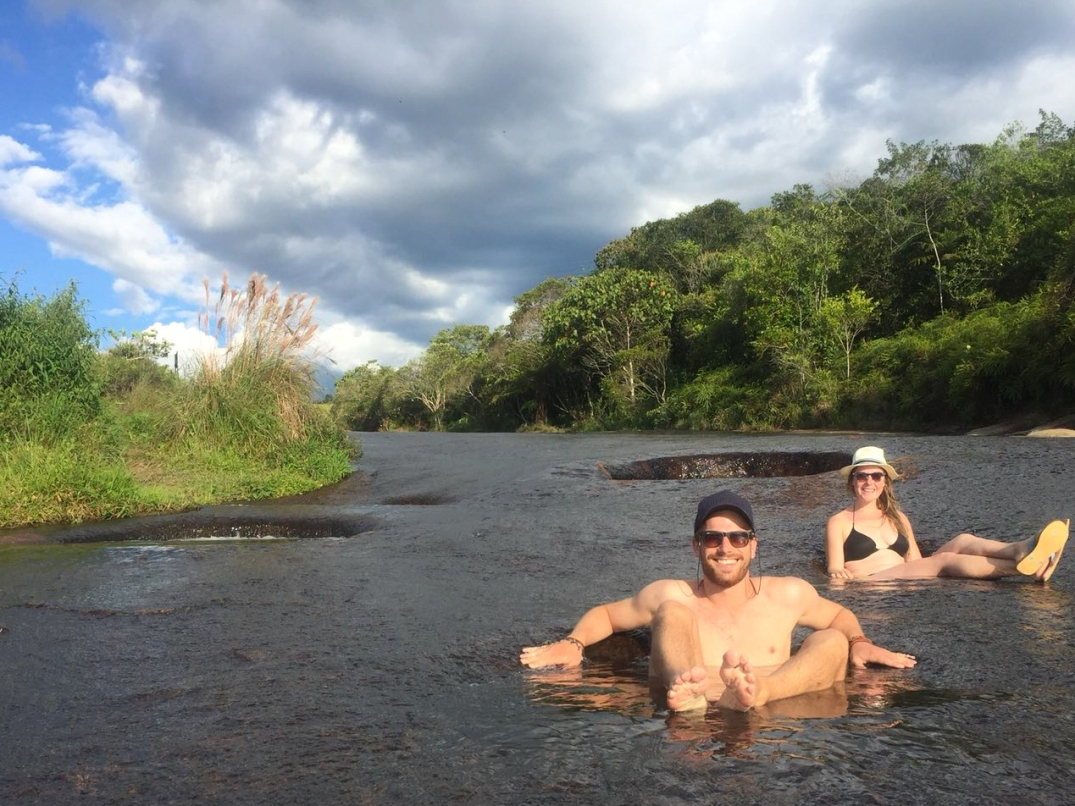 We made our way to Buracamanga to meet friends of Nils. It is not exactly a major tourist destination but  is often compared to Medellin. We spent 3 weeks on the Caribbean coast and I absolutely loved it but was  ready for some cooler weather. Santandar is famous for eating ants (hormigas). They go mad for them over here and I can confirm they are absolutely disgusting. We drove to a nearby Canyon with Lina which was really impressive and here we tasted the local delicacy of corn arepas with sweet chorizo. They cook the chorizo in panella which is Colombia’s natural alternative to sugar. Like most of the food in Colombia it’s only OK and we all agreed the chorizo would have been a lot nicer if it hadn’t been covered in sugar (like everything else in Colombia).

Given the volume of things I have lost in the past few weeks we decided to take a trip to a shopping mall to buy some new clothes to try to feel human again. I was done and dusted in about half an hour (and exhausted). Nils on the other hand likes to research and consider his purchases so I left him to it and I camped out in a coffee shop.  Hours later decisions finally made we headed back to the air b and b. En route home we both bought new phone chargers. Mine broke the following morning! South American electronics leave a lot to be desired. I also replaced my sunglasses, lost them the following afternoon. A new record! Since leaving Dublin I have lost a total of 20 pairs of  sunglasses. Impressive even for me.

We took a trip to Barichara which is described as one of the most beautiful towns in Colombia. It has apparently remained unchanged in the past 250 years. There are amazing craft shops where they specialize in shoes (they kind of look like elves shoes). We both bought a pair and almost missed our bus home because I was getting mine remodeled to fit my abnormally large feet. We spent the day strolling around and watching the world cup. Big statements from Nils saying he had his best South American empanadas in Barichara. It was stuffed with delicious pulled pork and served with some excellent picante. My best still remains the ones from Salta in Argentina but these guys were a close second. Colombian empanadas have been  generally a big disappointment.

Next stop was the adventure capital of Colombia; San Gill. We both wanted to go rafting so signed up for the following day. We went for the extreme option of grade 4 & 5 rapids. Nils has rafted loads before so it was a walk in the park for him. As for me I thought I was going to lose my life and screamed for the entire journey. I only fell out once so I would call that a success.  Amazing experience. It is the second best place to raft in south America after Futaleufu in Chile, Patagonia.

We both wanted to go mountain biking the next day but it was booked out. I had a contact for this woman who did cheaper tours so I decided to join her the following day. It was just me and Yuan from Argentina (thankfully not the same Yuan I knew from the woods). We biked down into this canyon v scary  as the roads were really bad and we had no protection but miraculously I managed to stay on board the bike. The weather was amazing and the subsequent steep uphills were hell.

We stopped off for some fermented panella a traditional drink in the region. It was alright definitely a taste that could grow on you. The locals from the countryside are completely different to that you meet in the cities. They are seriously friendly and love seeing gringos. They couldn’t have been more welcoming we were even treated to a round of free beers (which were badly needed).

Back on the bikes for some more steep inclines until we reached a secluded waterfall where we went for a welcomed dip. It was glorious and we had it completely to ourselves. We then made it to a quaint village called Palmar for lunch. This was an experience where the place was hopping with drunk Colombian men feasting on maize and beers. After a great feed of shock horror; rice, beans, plantains and meat. Followed by some drunken spanish conversation  and another local drink (beer, fermented panella and soda) we were back on the bikes (not able to feel my arse). A fantastic day with some really nice experiences in rural Colombia.

Next on the agenda was Guatalupe a tiny colonial town. There is absolutely no one here and completely off the beaten track We mainly went there because we wanted to visit Las Gachas. At the moment it is quite unknown that will probably change soon. This place is really cool and contains natural water holes on a river with amazing colours.

The views were stunning and kind of reminded us of Austria. En route I bought myself new flip flops moments later I ended up in a mud hole. Destroyed!

Once you arrive at Las Gachas it is pretty lethal walking on the rocks and I had a serious fall  for the second time that day. This place is scattered with  waterholes where you can just chill and have your own private jacuzzi. There was a backdrop of rolling green mountains which was incredible. We basically had the place to ourselves.

Our accommodation for the night was gorgeous. We stayed on this guys farm with stunning views of the surrounding mountains. I spent the evening chatting to him and he was obsessed with his cows so was very eager to get some professional  cow photography so I happily obliged.

The people in Colombia  are great the buses not so much….I firmly believe they have the worst transport system in all of South America. It really is a joke. So we had planned on making the very acceptable 120km journey from Guadalupe to Villa de la Levya. This turned into a disastrous 12 hour journey requiring 4 different buses. 9 months of backpacking has turned me into an expert at making the most out of bad situations. At this stage if anything is bad it’s an experience or a story ( and there have been plenty). It’s the only way  of dealing with these situations otherwise you would go mad. Also time predictions don’t include the bus man’s compulsory stops for sopas, secundos, postres and god only knows what else they stop for. The beauty of travelling for 1 year is time is most definitely on my side. The other good rule of thumb is if they predict the journey will take 2 hours double it (at least!!).

We eventually arrived into Villa de la Levya and we didn’t regret it. It was definitely worth the effort. It is quite similar to Barichara but there is definitely a lot more happening here with lovely little coffee shops, ‘french’ bakeries and bars selling vino caliante! We explored the town and got some excellent coffee. We both decided to get overdue  hair cuts. My last one was months ago, a DIY job  from my Mexican friend Brenda. Nils’s had been only 2 weeks ago but he is definitely more into up keep than I am. The hairdresser asked me if I wanted wet hair, damp hair or dry hair so I treated myself and went for the dry hair. Really pushing the boat out!

Dinner was a delicious steak for Nils and Salmon for me followed by 2 mulled wines. Nils was absolutely frozen so I suggested bringing my minus 20 degree sleeping bag to the bar trying to get some use out of it. Needless to say my idea was rejected. The days of the Caribbean are well and truly over.

The next morning we explored the town some more and went up to the Christ for an amazing view of the city. A quick coffee and a few empanadas later we were bundled into a bus to Bogotá all going far too smoothly for our liking. We made record time of 2 ½ hours and made the last of the England Croatia match and even had time for 2 beers to celebrate Croatia’s win!

We decided to splurge on our last night together and stayed in a fancy hotel. When I say spurge I mean 20 euro per night. We couldn’t have looked more out-of-place. My backpack is a disgrace  at the moment. Contents currently hanging outside backpack; a mattress, tent, sleeping bag, knicker bag, hiking boots, runners and a bikini so the hotel staff were delighted to see me coming. Without delay I made my way straight to the free food counter.

It was our last night together as Nils was ending his 6 month trip by finishing in Cuba.  We went to a rooftop bar (we were v lucky to get in). There were stunning views of Bogotá with  live Cuban music. People watching the rich civilians of Bogotá was most enjoyable. We usually only  drink aquila beer for 3,000 pesos (less than 1 euro) but we stretched the budget and went for delicious mojitos.

Like I’ve said before the Colombian food is OK. It is acceptable but nothing you would be getting excited about. The exotic fruits are probably the best thing going for them. When researching restaurants for once I opted for the most un traditional option; French. It was amazing from start to finish. We got free nibbles at the beginning (always a good sign). We went for aubergine and goats cheese starter with homemade warm bread (not laden down with sugar!). Mains were filet steak with béarnaise and salmon. Sides were potato gratin, ratatouille and salad. All this washed down with Chilean red wine. Dessert was  café gourmand where we split 4 mini desserts; crème brule, chocolate mousse, marinated oranges, and a chocolate and orange tart. Gorgeous. I loved it all and it was certainly a welcomed changed from the reliable arepas. We were even given freshly made bread rolls as a present going home. Thanks so much Assumpta for the most delicious treat it was so nice for one night not to feel like a backpacker.