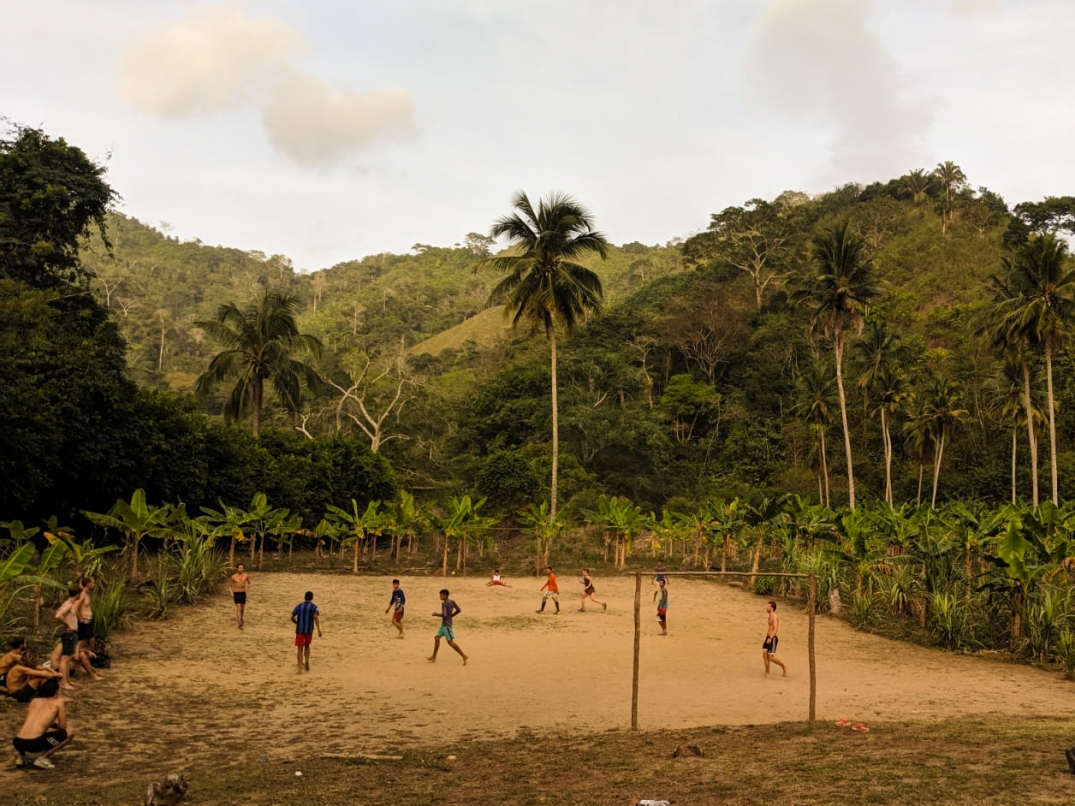 Having hairy legs while exploring the Caribbean is a bit of a no no. Proactive as always, I decided to invest in a professional waxing job despite the horrific eye brow experience. Anyways this wasn’t much better. I pick them well and ended up with a transvestite from Venezuela who ‘specializes’ in waxing. Who cares as long as he/she gets the job done. I knew it would be a disaster as he/she attempted to wax my legs using a pot of honey (no joke). This obviously wasn’t working out so well when a large blade was produced and he attempted to get rid of the hair (+honey). I had to stop him midway as we had to catch a bus. I thanked him  and exchanged whatsapps in case he ever comes to Ireland (sorry Una and Dom!)

The bus was a funny one  It  was crammed with locals and  as I was trying to secure a seat I realized my food bag ripped open and that the cork screw  had gone missing. This meant only one thing the vino had to be consumed. I shared it with a Colombian sitting next to me. He too happened to have a bottle of vino so he also cracked his open.We recruited another Colombian and a Venezuelan and got  the party started. It’s certainly one way of making bus journeys go fast.The vino party was in full swing as I was trying to negotiate with another angry bus man not to rip us off once again. On this occasion I was successful so happy days.

We decided to try to reach South Americas most northernly point called Punto Gallinas, a relatively untouched part of Colombia. All of the guides books were telling us the only way to make it to the desert was to take a tour.  We  found a few frenchies in our hostel who also wanted to do the trip independently so we joined up with them. The journey is renowned for being long, rough and very puke inducing. In the middle of the night  the two French girls and a German lad (not Nils) almost had a physical fight over a fan and the heat of the room. I was saying nada and just listened to my sleeping playlist of Eminem. Next day myself, Nils, grumpy Frenchies and grumpy German all bundled into a jeep en route to the far away desert. Nice and cosy for a wild few days together.

The first stop was Cabo de la Vela. The drive was so interesting and at times quite shocking as we saw first hand how the Wayuu Indigenous people live. The people living here are so poor that the children (and some adults) have built barriers out of sticks, ropes, bicycle chains and whatever they can get their hands on. They frequently  stop the passing jeeps begging for water, food and sweets but especially water. There is a huge scarcity  here. We were both sorry we didn’t bring more for the people.

Our driver, Darwin completely ripped us off. He also had no idea where we were going and got lost a number of times. That being said, he turned out to be very generous with the locals stopping and speaking to almost all of them giving them rice, water and other food items so he redeemed himself in my eyes.  He was a likable divil and definitely a chancer.  On our last day with him he told us to be ready at 5am and he then casually rocked up at 8am. Not a bother. Needless to say Frenchies were bulling.

The beaches are out of this world and not like anything I’ve seen before. It’s so strange being on a desert and then swimming in the Caribbean sea. We were the only two chilling on the beach drinking beers. Beers and cigarettes are dirt cheap here because they are getting everything from the Venezuelan boarder. We spent the day visiting different view points off the coast. The winds were incredible and pretty lethal at times where you could have been easily blown away.

Myself and Nils camped on the beach and  surprisingly wasn’t too bad (compared to our previous disasters). The next morning  we wanted to leave early so that we would make the Colombian match. Of course we were waiting for Julian the German who was constantly late. Frenchies were steaming in the car and tensions were high when he rocked into the jeep 25 minutes late. You could cut the tension with a machete and everybody was v pissed off with Julian. There’s always one I suppose….

Punta Gallinas is as remote as it gets and is officially the most northern point of South America. We were worried about not getting to see the Colombia match because everyone had us warned that there were no TV’s in Punta Gallinas. So a brand new TV was brought in especially for the match plastic still in tact. After a successful  win we were piled into the jeep with Julian, Frenchies and some welcomed new recruits; Sophie from England and Flo from Germany. At last some nice people not wanting to kill Julian. We were brought to the official most northern tip of South America which is a little bit of  let down and just a handful of rocks and a dull sign. They definitely could have made more of an effort but quite cool to make it there nonetheless. Really delighted I made it from Ushuaia the end of the world in Argentina all the way to the most northernly point in South America. A total of 10,636.1 km travlled!!!

Back at the hostel myself and Nils shared a fish and with a few others we walked to the nearest beach to watch the sunset. One of the lads Martin got stung by a jelly fish while bravely going for a dip. It bought me back to my days when I ended up in hospital  caused by a jelly fish sting on my right boob on a trip to France. Nasty little feckers.

That night dinner consisted off more fish (cold on this occasion), chicken but the star of the show was the goat. A  delicious local delicacy in the desert. Nils was devastated and changed his order last-minute for the chicken. Martin the only smart ones amongst us all milled into the goat. This trip gives you an amazing insight into the culture of  the Wayuu indigenous people and the difficult circumstances in which they live. We were both dying for a bed and fresh water. Showers consisted of using  buckets of sea water and we also had to use sea water to brush our teeth. Violent!!! A memorable experience but both of us happy to leave the desert behind.

I thought travelling with an organized German would solve my problems of loosing things and just being a mess in general. In fact the opposite has happened. Since meeting Nils I have managed to loose a record amount of things; a new pair of havianas, 2 towels, 3 pair of sunglasses, 3 phone chargers (1 broke so doesn’t count), shampoo, shorts, t-shirt, lap top charger, camera charger, camera battery, ear phones, pepper spray, pad lock, countless amounts of knickers and socks, sun cream and an entire bag of food and cutlery. I think that’s about it (for now). Nils looses nothing but since meeting me he has managed to loose his shoes so he’s catching up on me (kind of). I used to get very upset about loosing things but since it has become such a regular occurrence I’ve become quite accustomed to it. Also, having just come back from the desert you realise how futile and unimportant these things are and how lucky we are to easily replace them. Una reassured me that as long as I don’t loose myself that I am doing well. So as always looking on the bright side of things.

El Rio  is voted best hostel in Colombia so we were dying to see what the fuss was all about. When we arrived we were both booked in for hammocks but I ended up pitching my tent instead. A preferable option to a load of irritating snorers.  The day we arrived the hostel had organised 5 aside football against local Colombians. It was the perfect setting, right in the middle of the jungle. We had to trek through rivers for about 40 minutes to get there. It was a surreal setting for a football match. It was a little bit over whelming at first against the Colombians. They were in a different league but I decided to get stuck in nonetheless. Nils ( a previous professional footballer!) scored a few goals. I unfortunately wasn’t as successful on the goal scoring but my strong suit was assisting (a very important task). I loved it and definitely one of my Colombian highlights so far. Walking home in the dark was always going to be a tricky one and true to nature I fell over and landed into a pile of muck +/- poo (who knows).

The next day we were signed in for tubing where we met Martin and Lisa a couple from Holland who we knew from the desert. Tubing is where you float down the river in a rubber ring drinking cold beer ( really tough going).  Naturally I got into some difficulties and couldn’t move my tube so I bribed a young Colombian Kevin to push me down the river in exchange for a few sips of beer. A fair deal even though Kevin was probably around 14. We stopped off to jump off some cliffs and rocks. Plenty of belly flops later myself and Kevin were back on the tube. That afternoon resulted in an extremely competitive game of volleyball where we were joined by more friends from the desert Sophie and Flo. Nils struggled at  the volleyball and tried to redeem himself in the ping pong tournament. Unfortunately this was not the case where the score was a miserable 11-1. I fared a little better with 11-5.

So not one to miss out on any freebies I signed myself up for yoga the following morning thinking it would be a nice stretch. It was a torturous hour with the best part being the namaste day bow at the end. After stocking up on the free breakie of granola and delicous fruit we got motorbikes to take us Costeño. beach.  I lost my reliable sombrero en route to the beach. This was almost the worst of the lost items as I relay on this for covering up dirty greasy hair. We both agreed that this was our favourite beach on the Caribbean. It was  pretty much deserted with crazy waves and palm trees coming out of your ears. Nils checked into a dorm and I decided to camp for the night trying to save on the dolla bills.

We left early the next morning wanting to be back in Santa Marta in time for the Colombia  England match. Sophie and Flo joined us as the atmosphere was electric especially with Sophie swinging for the other side. Credit where credit is due she had a Colombian jersey and geniusly drew English flags on her face using tooth paste and lipstick.  Backpacker improvisation at its best. With the match resulting in penalties it was a devastating end for Colombia.

Myself and Nils got a little too excited at the game  resulting in an unnecessary extra bucket of beers. Afterwards Nils ended up falling asleep on a hammock and I took a visit to the supermarket. Dangerous.. Anyway long story short we missed our bus so ended up having to stay in a random holy man’s house that night. On the plus side we had plenty of food from my ridiculous shopping.