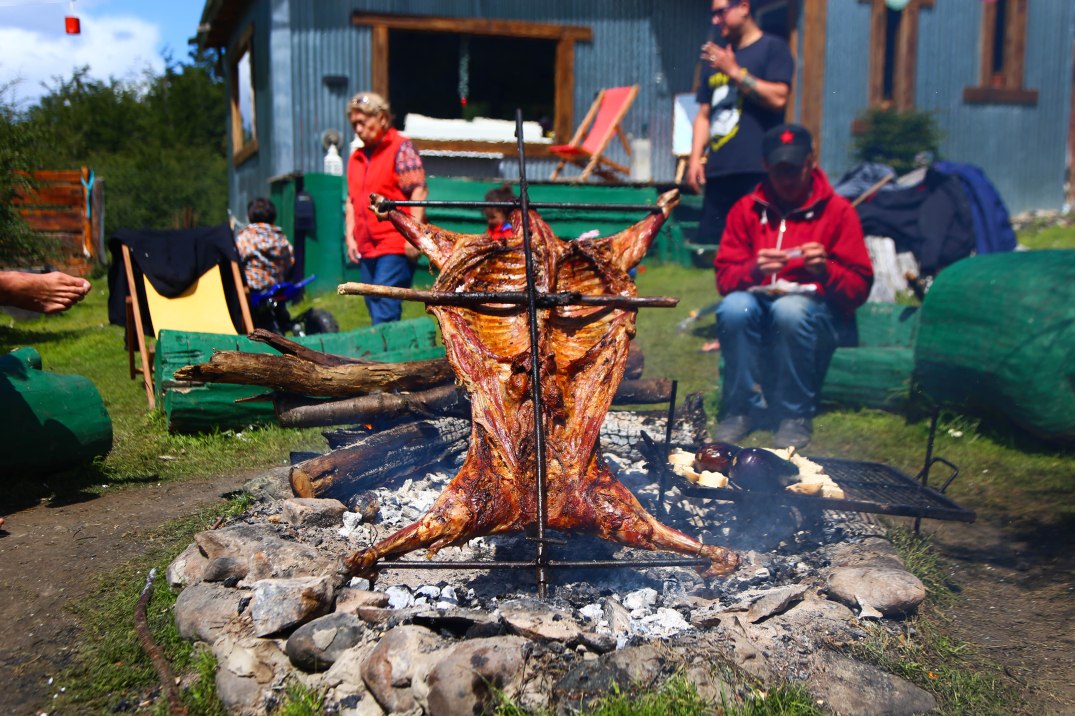 Next destination; Ushuaia, Argentina. Obviously the impulsive buying of the tent, inflatable mattress and sleeping bag was going to cause some problems in terms of carrying. Something I obviously didn’t consider. One of the guys working in the hostel insisted on helping me pack needless to say I didn’t decline (completely forgetting about the abundance of dirty laundry, the poor fecker). My food bag Is getting bigger and bigger by the day. The old garlic is fairly pungent at this stage but stubborn as always I refuse to through anything out (channeling my inner Dom).

I took a 3 hour bus to Punta Arenas where I had to spend the night before catching another bus south to Ushuaia. The bus left me off at 11 pm so I struggled in the rain to find accommodation everywhere was extortionate. I eventually found a cheap place after about an hour walking. Dinner/ breakfast was rice cooked in cream with a stock cube (I won’t elaborate on this one). I was offered a frozen ‘burger’ by a Russian lad which I politely refused as it resembled a dirty cloth for your feet. I know my standards are fairly low but you have to draw the line somewhere.

The following morning I was planning on getting the 15 hour bus to Ushuaia. I was so so lucky I got the last ticket for the bus with all other buses booked out for new years. I eventually got off the bus at about 9pm. Every backpacker you meet raves about the app maps me (similar to google maps). To date it’s been fairly useless for me and has actually caused me problems. Anyway I decided to give it another shot.  I used it  to find a *free camping spot* in Ushuaia (not an easy task) . It was a really random place for camping with no other tents so I wasn’t sure… The place was a steep hill with lots of tourists taking photos from a view point. I decided to trust maps me and I managed to pitch my tent all by my self. Delira! I was chilling in the tent when the police came over to say this was a public hill and camping was illegal not exactly a surprise. Anyway a blessing in disguise they took me in their police car and found me a hostel for the night.  A sleepless snoring night but breakie was included so happy days.

Ushuaia is known as the end of the world. One of the reasons a lot of people come here is to go to the continent Antarctica (which is only 1000km away). This was one of things I really wanted to do in this trip. But it was quite clear early on it was going to be goer with the cheapest price I could find coming in at 6k. Some people camp out in Ushuaia for weeks looking for last minute offers. I Decided against it. It’s definitely going to be a bucket list item for the future (maybe when I retire)!

The next day the hostel found me a legit camping site 5km out of town the owner came and picked me up on New Years Eve.
It was fairly basic with a chemical toilet, cold ‘shower’ and of course no signal or wifi but gas people so that’s the main thing. There was about 20 others camping mostly from Argentina, a few Germans, Italians and Brazilians. I couldn’t understand one world they were saying.  The past 2 months I have been learning Chilano (they essentially have their own language). The Argentinian Spanish sounds kind of German so back to the books. Nacho an Argentinian farmer who has 1000 cows was feeding me chunks of meat all day. In my element. That night we had the biggest meat and wine feast.  Lorenzo and Tatoo (friends from Chile) eventually arrived equipped with more meat and wine.  Honestly I don’t think I’ve ever eaten as much meat the party went on until 6am. I think I was making up for being so hungry for the past 2 months. With the vino running out we moved on to the pisco & fernet  ( a typical disgusting Argentinian drink that tastes of herbs) and then obviously back onto the vino.

New years day was spent nursing a hangover with more meat  but not just any meat, a whole lamb a delicacy of Argentina called Cordero. The whole day evolved around the roasting of the lamb which takes approx 4 hours. It’s massaged, bathed in beer, and rubbed with all sorts of condiments. I genuinely can’t put into the words how incredible this was like silk in your mouth.  We spent the day like animals ripping shreds of meat off the animal, sucking meat from the bone and of course drinking excellent Argentinian wine. Any trace of female was well and truely gone.  The later part of the day I was given a tutorial on how to use an axe. V addictive.The men were shocked at all the meat I was putting away. It was more than ideal with a few vegetarians in the audience there was more meat on offer. We all hit the bed in the height of meat sweats for the first warm sleep of the year.

The following day at capacity with meat we decided to go explore the nearby glacier. Myself, Tatoo and Lorenzo agreed to meet at 10 am (they were staying in a free campsite nearby). With them missing in action I decided to head off on my own hoping they would catch up with me. Somehow I managed to go to the wrong glacier. I left at 2 pm for an 8 hour round trip in hindsight this was a terrible idea. The weather was atrocious freezing, pissing rain and snowing. The steep hike upwards was trecharious with regular falls along the way. Most of the people I met on the way up were urging me to turn back with the snow getting heavier and heavier. I found two sticks and slowly got to the top where the weather eased a little. The way down was fairly dodgy with me falling every few minutes. I eventually got back to the campsite covered in mud looking like a grizzly bear. I took an icy ‘shower’ and started straight on the hot whiskeys. Lorenzo and Tatoo eventually came back and we figured out I had gone to the wrong glacier. New year’s rule no solo trekking (Úna I promise).

The following day a gang of us decided to go for a two day trek into Tierra Del Fuego National Park.  I thought I was un organised but then I met  Lorenzo and Tatoo they made me look good. The three of us together was a recipe for disaster. We had planned to head off early with a few others from the camping site but we only managed to get ourselves together by 2 pm.  The walk was stunning despite the pissing rain. We eventually arrived at camp hours after the others, a beautiful enclosed Laguna. We were all frozen and covered in mud. I had fallen into a river so I was genuinely soaking. None of us had brought a change of clothes or shoes so we made a fire and attempted to dry off. I got chatting to a few randoms near our tent so managed to secure myself a pair of hiking boots for the evening off a chap called Reuben he even threw in a mate  for good measure.

The fire was a god sent with the weather freezing.  We were camping at the bottom of the world quite cool! Myself and Tatoo started to heat up rocks to try and get the sensation back into our numb hands and feet. We were all cooking our socks on the fire. I had the genius idea of drying off my hiking boots in the fire I obviously got distracted when there was some food on the go that my hiking boots went on fire ( at least they were mine not Rueben’s). I’ve never had the best track record with fire 4 years ago I set my hair on fire in a bar in Berlin so another rule going forward stay away from fire not matter how cold I am. Raging I will have to buy another pair. These boots have been around the globe in Everest, Kathmandu and more recently Patagonia (thanks Sinead for the discount! Ecco served us both well).

Dinner was complements of Lorenzo. Absolutely stunning concoction of pasta, cream, tuna, scallions and cheese. We all inhaled it! Washed down with lots of mate. Mate is a herbal tea famous in Chile and Argentina. I hated it at the beginner it’s quite strong but definitely grows on you and anything hot is a luxury in sub zero temperatures.

Myself, Lorenzo and Tatoo shared a 2 man tent for the night trying to warm up.  We managed to sweet talk Rueben into giving us some of his pasta and tomato sauce.  The campsite was absolutely stunning and so quiet. Waking up to stunning mountains and a gorgeous turquoise lake was pretty special.  With some unexpected sun we chilled in the campsite until 3 pm. This in hindsight was once again a terrible idea with a 7-8 hour trek ahead of us. The sun was short lived and we got drenched for the duration of the day with rain and hailstones. As expected in Patagonia. The second’s days hike was absolutely stunning with fjords, waterfalls and lakes (unfortunately we all forgot our cameras). Absolutely knackered we got off the mountain (still 12km from our campsite and with darkness closing in things were looking grim). We still had to try and find a bus and walk another few extra km. Shivering with the cold we all agreed we would be better pitching the tent on the street. Lorenzo started inquiring could we pitch the tent in  a woman’s garage. She saw us all shaking and invited us in for coffee. Absolute heaven. The guys went off to buy food and wine for the dinner. In the meantime  a random man came over and took pity on us. He said he had been backpacking before and homeless and he knew how it felt and that if we wanted we could all stay in his house and have hot showers. We couldn’t believe our luck and almost cried with happiest. Coffee woman drove us to his house. When we arrived it was clear the chap and his partner were funny fish (but very nice fish).  They were most certainly involved in some dodgy dealings but we were all just so grateful for the roof we didn’t care. They arranged 5 mattresses on their kitchen floor for us all (even though they had their own bed?). We blared U2 and the cranberries, drank wine, watched limitless and had the best showers of our lives.  I was even given clean socks a thing of the past since starting back packing. * I was so sad to hear about the recent death of Dolores O Riordan.

Next stop Calafate. The guys are on motor bikes  such an amazing way of travelling around (p purchase in the future?). I resorted to hitch hiking!